Liberty 10U now ranked #3 in nation in USSSA Power Rankings 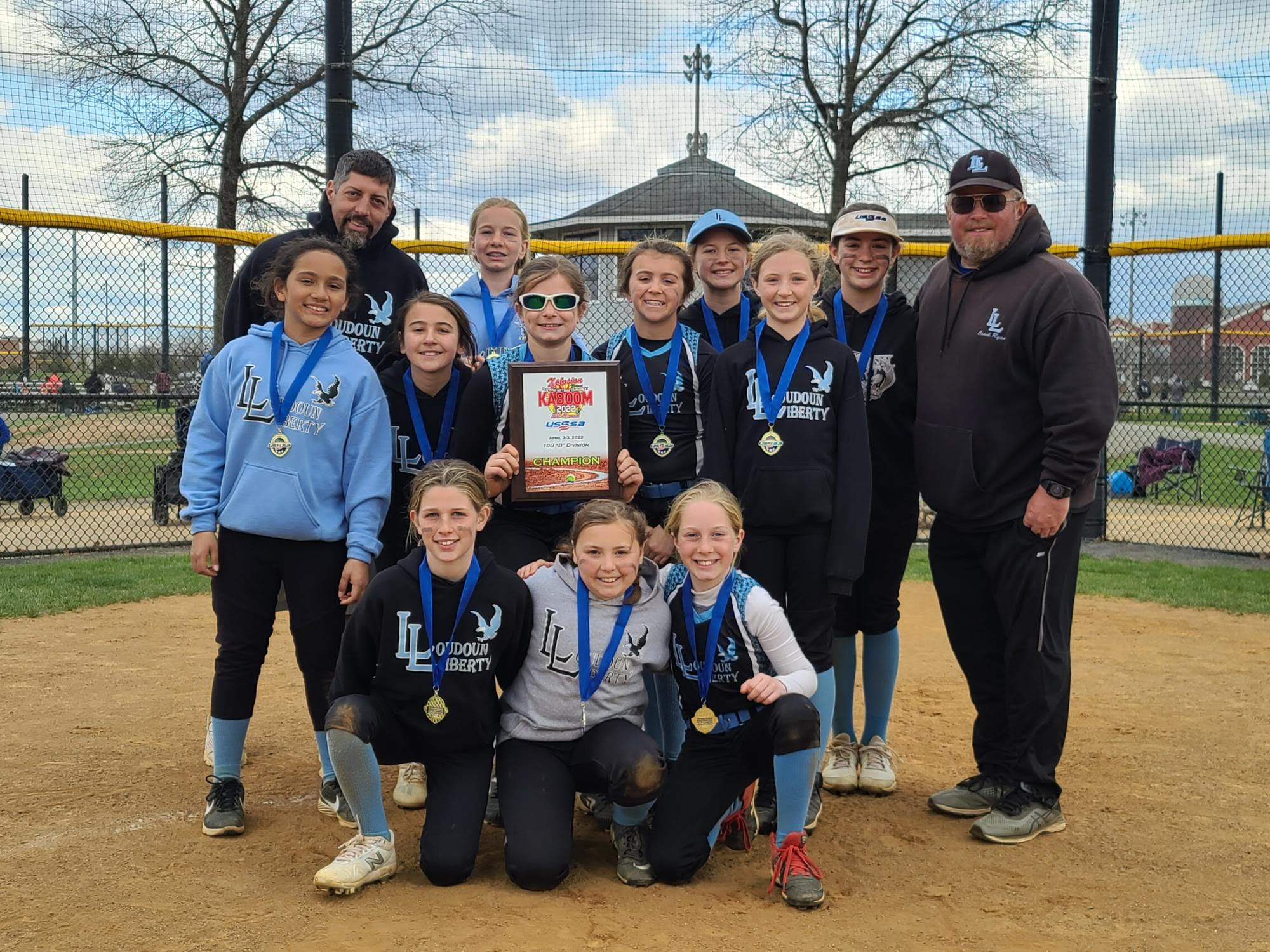 P Brynnly T. homered and tossed a 6-inning, one-hit shut-out April 3 to lead Loudoun Liberty 10U to an 8-0 win over the Ashburn Shooting Stars 2029 and clinch the championship of the USSSA Xplosion Classic 10UB tournament. The decisive win capped a 6-0 run through two days of play, during which Loudoun Liberty outscored six different opponents by a combined score of 42-9.

The weekend featured dominant pitching by Brynnly and Chloe S., who set the tone for the tournament with a four-inning performance in the pool player opener on April 2 in a 2-1 win against a very good PA Elite 10U team. Chloe then prevailed in two bracket play games, the first in relief against tough competitors Firebirds (Jacob) and then as starter of the semi-final versus Revolution (Schwanda). Gianna S. also contributed, pitching the first three innings in the 6-inning Firebirds game as well as starting the second game of pool play against the Delaware Fury. Mia J. carried the team through most of game 3 in pool play versus Maryland Integrity.

Offensively, Brynnly’s first-ever over-the-fence homerun against the Fury was the buzz of the tournament; she also had a triple to score the first run against PA Elite and her inside-the-park homerun in the championship game put that game out-of-reach for the Shooting Stars. C Addie Pratt and Chloe also had inside-the-park homeruns on the weekend. Leadoff hitter and C Allie E. was 9-for-13 on the weekend, Chloe was 6-for-12 and OF/3B Sabine C. was 4-for-9. Sabine and 1B Callie Robinson each had triples.

Liberty also put on a defensive clinic, sometimes catching opponents by surprise. OF/1B Mia J. set the tone early, flagging down a towering fly ball in RF during the first pool game to begin PA Elite’s second inning. In the third, while playing first base, Mia gunned a throw to 3B Gianna S. for a double play on a runner trying to from first-to-third on a grounder to 2B Kendyl D.  In game 2, Brynnly in CF backed up a bad exchange trying to catch a runner stealing second by throwing out the same runner who was trying to take third. In the third game against Integrity, a perfect toss from Allie to Mia after a passed ball caught a runner trying to score at home; Mia completed a strike-out three pitches later to stifle the Integrity rally. On Sunday versus the Revolution with a runner at 2B during the first inning, Addie in CF fielded a base hit and threw a strike to SS Mackenzie S., who threw home to Allie for a huge first out at the plate. And, in the championship game, RF Campbell R. cut off the Shooting Stars’ only hit, a sharp line-drive that would have been a triple at least had it gotten by her, relaying the ball in to second base like a pro to hold the batter to a single.

Loudoun Liberty is now 10-0 on the Spring and ranked #1 in the Northeast in USSSA power rankings for the 10UB and #3 nationally. The team is next in action April 23-24 in the Glory Spring Invitational Tournament, which features top-ranked teams from across the mid-Atlantic. Catch the action on GameChanger!